In the Stance exercise, the poses were simply depicted and most are captured fairly well. Number 3 is a little upright I feel, although the weight is anchored on the model’s right foot correctly. The shoulders are maybe a little too level and not following the diagonal.  With the Energy exercise, as I had a moving target, I think the sketches are representative of what I saw with the exception of the very first one where I was too late to get the arms down convincingly.  Also, it would have been good to have realised the brief and gone larger on the paper to try to get feet and hands in all the sketches, although with hind sight, as I was being a little covert, an easel and bigger sheets of paper would have been trickier logistically.

In the Stance sketches, most are balanced and have the weight distributed as was, however, as before, sketch 3 looks a little unnatural. As does number 2, yet he did look that way in life.  With the Energy drawings, although they are moving, waiting for the repetition of a position did allow for fast reworking which probably assisted with correcting any imbalances.

By using the opportunity to watch and draw while my model was doing a workout, it put me in the right frame of mind to be quick when both observing and drawing. I kept working the lines even when waiting for the position I was drawing to re-present itself so there was energy in the marks and in the “poses”.  The first two sketches are the most static as I was a little late with reacting and didn’t have a second chance to get the movement in the mark making I would have liked. 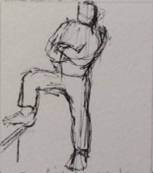 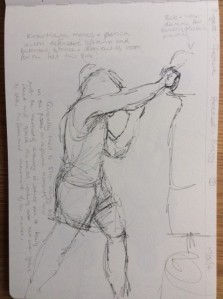 Quickly sketch the figure, trying to convey the sense of energy each pose creates.

Slightly misreading the brief where I should have used A4 or A3 sheets per drawing, I took my A4 sketchbook into the garage where my husband was doing his workout.  I made a few drawings per sheet except one which was on its own, however, not particularly well placed in the page.  As these were to illustrate energy I worked quickly trying to capture the movement without actual posing of the model but catching what I could in the time, with the exception of the Krav Maga poses which were static briefly as difficult to keep for long. 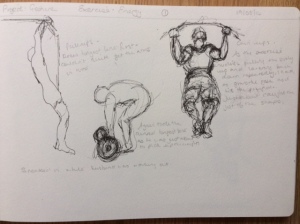 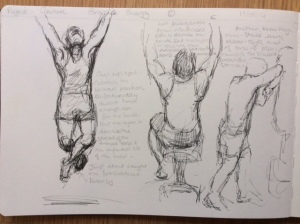 It may also be worth noting that these exercise are out of sequence with the course schedule due to availability of a model, rather than waiting doing nothing, have moved on to keep the momentum of work.

Mark the central axis in your initial sketches of the standing figure.  Ask the model to change poses every 2 to 5 minutes.  Draw as many quick poses as you can. 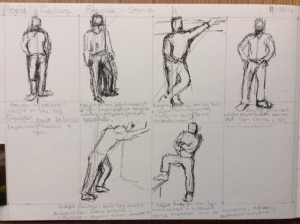 Exercise: Stance
Quick poses in standing position.
Liner pen – all on A4 sheet

The main challenge was thinking up poses for this exercise – hopefully we achieved a good variety of stances.  Whilst writing my notes in my sketchbook, it occurred to me how each pose may be interpreted in body language.  This would be useful when making a drawing with a specific narrative, when trying to convey an emotion or behaviour, as well as trying to make a figure believable and grounded on the paper using the central axis.  The stances above range from a casual open impressions, passive/aggressive, through to despair and arrogance.