Impasto effects can be achieved with both oils and acrylic paints.

Work on prepared surfaces to produce several experimental paintings in which you try out the following effects:

For the following experiments, I decided to use acrylic paint purely for practical reasons. The drying time would be significantly shorter compared with oils. I had no impasto gel medium at the time but did have several tubes of heavy body acrylic paint which are specifically designed for such work. 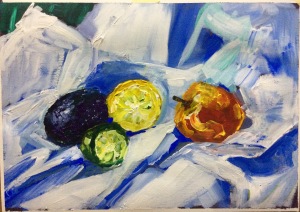 Never having tried this style of painting before, it was interesting to discover how difficult I found it. With the brush, I found it frustrating that it took off almost as much paint as it left. I used mid-sized flat hog brushes to produce strokes of paint, varying the size of the marks to make the predominantly round objects curved. It was enjoyable, and I think with more practice the more I will understand how to achieve the look I was after. I found it easier to use different brushes for each colour which gave a cleaner mix on the board. 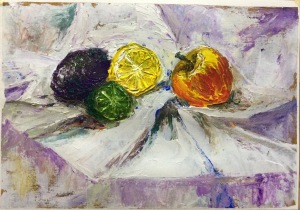 I decided to use the same subject for all styles in this exercise to fully appreciate the differences. I had previously played around with using a knife to paint but not with impasto specifically in mind, so again this was new to me. I used the same palette of colours, prepared acrylic paper and subject, the only difference being the tool itself. I used a longish, triangular knife to give me the most options of mark making, broad sweeps, pin point marks, swirls and lines. Now this was more like it! Great fun and very interesting how the colours mixed, they could be smeared together to a greater or lesser degree, laid on top of one another or almost hatched over or next to each other. I even liked the unintentional transference to the “wrong” place when a pigment was left on the knife – this seemed to bring a unity to the painting. Textures were the key here rather than just shapes and colours. I had used a cotton table-cloth with drapes and folds in the still life and the paint responded to soft dips in the fabric, sharp creases or where it fell down over the table edge – all with the same knife. The fruit used in the arrangement consisted of a knobbly avocado, a lemon and lime, with their pitted peel, cut in half to reveal the citrus flesh and a relatively smooth apple. I feel I successfully rendered all of their individual textural characteristics with this technique. Putting down the brush and picking up the knife made all the difference to my mindset and allowed me freedom to slap the paint on and just make use of what happened on the board – and, if I didn’t like it, I could just scrape it off. This is something I have to force myself to do when using a brush, I often keep adding more and more paint on top and make a mud pie!

(Note to self: having just previewed this post and enlarged the painting above, I have actually instinctively used sgraffito to help describe some of the textures and shapes and allowed the ground colour to act as a tonal value.)

Apply two or three colours thickly with a knife or piece of card, allowing some areas of colour to overlap. While the paint is still wet, draw into this using a stick, the end of a brush handle or a pencil.

Have scratched into oil paint a few times to achieve texture, however, not particularly successfully – I have probably used this most with oil pastels. Here I used three colours and then tried to draw my still life arrangement loosely into the paint with end of a brush handle. The initial line drawing needed a couple of attempts at scratching into the paint to be really visible. I found it a bit tame after the knife painting so tried to add some shape and three dimensionality with some hatching marks. This started to work but it became confused – or should that be abstract? I think this would be useful in a painting to add texture or on a more dramatic ground to bring out the image. I would like to try this again, not just with lines but broader strokes too, maybe a combination of this and palette knife would be more appealing to me?

Find out what you can about this effect which was used by the old masters as well as by contemporary artists.

Sgraffito although an Italian word for scratching, has been used in effect since the first ever paintings. It has been found on cave and wall paintings of native art, has been used on frescos and murals, is a common technique for decorating ceramics and glass as well as in paintings themselves.

I  am sure that many paintings with which most people are familiar will have elements of sgraffito in them, Da Vinci, van Gogh, Turner among many have incorporated this technique into their work. I am particularly taken by the use of painting knives for impasto painting and, after doing a little more research am intrigued by sgraffito. I am particularly inspired by the work of Joseph Loughborough, who although seems predominantly to work in black and white, has incorporated lots of marks, texture and life in his images. Regarding my previous work in the earlier parts of this course, I feel I could have made more interesting and exciting paintings by not relying just on the paint brush. I am currently looking forward to visiting the Frank Auerbach exhibition at the Tate Britain at the end of the week.