Our brief for today’s class was to bring two small prepared boards, large brushes and either oil or acrylic paints.

During our tutor’s explanation of the lesson to come, he related to a recent trip to the Pallant House Gallery in Chichester where there is currently an exhibition called Sickert in Dieppe. Another student kindly brought in the catalogue accompanying the exhibition. We were to pay particular attention to the figures and the technique of creating tone that Sickert had used. Our tutor summarised it as “scrub and dab” (patent pending?).

Using a limited palette (above), we were to work in darks and mid tones exclusively for the greater part of the time and save the lights till near the end. Working in thinned paint, the darks were scrubbed in, then the mid tones covering the entire canvas appropriately as we saw them on the model. We were discouraged from leaving the “lights” but to build layers so that some of the darks may even show through. As we progressed, we used less dilute paint and evolved into the “dab” stage. Sickert had used little marks and strokes of paint to build up the tones rather than lines and sweeps. (Also reminiscent of Van Gogh in his mark making). The first sketch took us up to tea break, and I unfortunately, ran out of time to put my lightest lights down but the technique was coming.

With the second sketch we were to adopt a similar approach regarding the darks and mid tones. Working for as long as possible to build up the structure of the face and shoulders before adding the lights. This time we were to make considered marks – looking at the model and making a definite decision as to where they should be placed. Using a long-handled brush, I tried standing at arm’s length whilst painting – this gave me a clearer view of the entire sketch to decide where to make marks. Standing back, assessing and then confidently putting down a mark was excellent discipline. I had seen Nicky Phillips (who painted the double portrait of Princes William and Harry), and read that Whistler had (as I’m sure had/do many other artists) adopt(ed) that approach. Again, I ran out of time to add the lightest lights, however, feedback from my tutor was that I had worked up the entire sketch equally so that all parts were are the same stage. A little longer and it may have been quite successful? 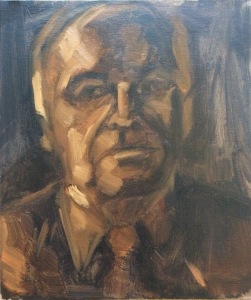