We were asked to make several decisions on how we wanted to represent our sitter ie scale, position, background and light source, what they would wear ie what effect would a black jumper have on the impact of the face and the relationship to the background of the picture?

I’m sure I’m not the only student who, quite frankly, is grateful for what they can get when it comes to having someone sit for their portrait. My husband, who sat for me, is currently doing some studying of his own, so I took the opportunity to grab him while he was fairly still. My main conscious decisions were:

I only had a maximum of two and a half hours including set up time due to having to be somewhere at 4.30. I also had to allow for a couple of breaks as cups of tea was the bribe used.

I started off in a traditional way by blocking shapes with dilute raw umber and removing lights with a rag. Next working in darks with a mix of ultramarine and raw umber, making sure I had the level of the shoulders correct as Glyn was looking down at his books. This was a good start and I was pleased with progress so stopped for tea break number one.

On returning to the painting, there was a bit of rearranging to obtain the same pose and then off we went.  It transpired that Glyn is a little unusual to most sitters, in that his head lifted up as he relaxed not drooped down. After initial suggestions at returning to the original pose met with gentle opposition, I changed my rendition, only fair I suppose. 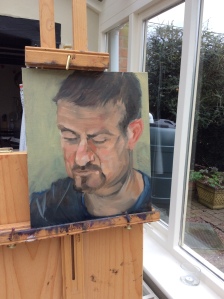 Another difference to most sitters, is that a small smile drifted on and off his face, which helped give me insight into his expressions and subtleties of his features.

Glyn was pretty pleased with the result and I thought it best to stop when I did to keep the freshness and the likeness instead of trying to make it the perfect painting.

After finishing, I posted it on Facebook for both my and Glyn’s friends and family to review for likeness. Had the thumbs up on the whole. His mum recognised him (which is a bonus), along with his young niece and nephew, who are around 6 and 8 but don’t hold me to that, who knew who it was straight away.

An enjoyable couple of hours, and glad to be back to the oils.

Head and Shoulder Portrait
Glyn – Oil on canvas board 10×12″

One thought on “Exercise: Head and Shoulder Portrait”