Today’s session was one sitting and concentrating on attitude and gesture, this time of dejection, depression and generally down on your luck.  Usually we wouldn’t have a lot of time to sketch first, however, Chris got into pose and character early, almost unnoticed.  He was raised up on a chair on a low table, so was a little higher than my eye level,  I made a quick compositional sketch and worked out where I wanted to place the figure and how much I wanted to include. 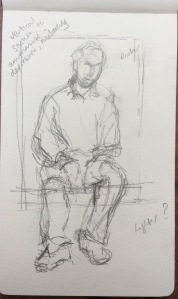 Composition sketch Pencil in A4 sketchbook

Starting as usual on an acrylic ground, this time of raw umber, yellow ochre and white mix.  I blocked out the figure and the general attitude of position in dilute raw umber, adding darks and mid tones.  Once happy with the position I began to add flesh colours and tones of his clothes.  Chris wore a baggy shirt that he seemed to have shrunk into with torn jeans.  It was important to create the background in a way that emphasised the down and out character, Mike suggested that vertical brush strokes can evoke that atmosphere, and that using a dark colour at the top and lightening it towards the bottom can also assist. I decided to use exaggerated dark on the left of the figure and run dilute paint down from the top right.  This gave the feeling I was after, symbolising a downward direction and maybe even tears.  All colours were kept sombre. I was particularly drawn to Chris’ hands, they were hanging in complete submission and were a little gnarled suggesting that they had worked hard all his life to no avail.  I was hoping to make more of them, however, in retrospect, the unfinished effect made the face the focal point. 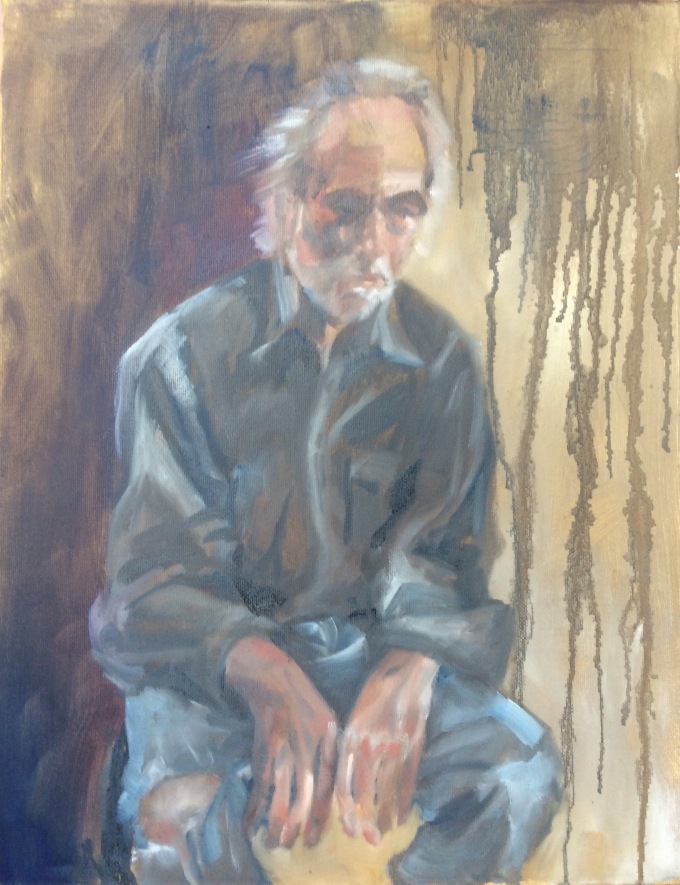