For this assignment, produce a finished painting at least A3 in size in your chosen medium… Your painting should be representational – showing what you see – rather than abstract.

As we were instructed not to be too ambitious, I cast around for items that are interesting in shape, colour and tone.  I had already decided to use a cardboard box as a light box to help control the lighting – the weather is so unpredictable at the moment so the light changes very quickly.  I had in mind the chiaroscuro research and wanted to attempt the modelling of light.  I finally selected an empty champagne bottle (a Christmas present – full not empty), a hand-painted espresso cup and saucer and an orange.  The idea was to work in the blue of the cup with the orange for complimentary colours. I experimented with the lighting, not changing the actual arrangement of the object very much at all. Both lighting options were drawn in line and then in tone to help decide which to use. 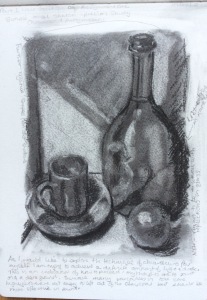 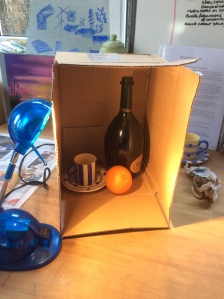 A slight cheat here, photographed the drawing and then used the same drawing for the watercolour tonal study.

The weather conditions were overcast but not dark, therefore the secondary light was quite neutral.

Sketchbook Notes at this Stage

Selection of composition: The brief was to keep it simple – I am happy with the composition, bearing in mind the following:

1. After making two tonal studies and initially favouring the second – I have changed my mind.  Study 1 has a clear focus on the coffee cup and saucer, yet the play of light and dark is still high in contrast. I have lost edges of the right side of the bottle as it is in deep shadow.  However, study 2, where I tried to exaggerate the shadow and the majority of the objects are in shadow and part of the orange is in focus, makes for a rather dull image.  Too much dark, which admittedly can be dramatic, would in this instance just be gloomy.  This is not a narrative piece of work but a showcase for my learning of modelling light, therefore there should be some!

2. Arrangement of objects  is very similar in both, however, the placement of the fruit in the second arrangement gives more subtlety in the shadows on the right.

3. I am happy with the selection of objects bar the fruit – orange or apple? I intend to make two colour studies to make my final selection, as the shapes are similar but the colours are the question mark.

4 &5  Happy with the use of the improvised light box – this assists with maximising light and dark, rather than allowing too many superfluous light sources to dilute the chiaroscuro effect. (Whilst researching Chiaroscuro artists, I found that Tintoretto would use a box with an aperture cut out through which he would place a candle to light his subjects.  This, I hoped, would give a similar effect.)

With both colour studies I went straight in with paint, with acrylic it was easy to over draw and correct mistakes. The first study was really feeling my way – the colours used were far too warm overall so that needed addressing.  I also forgot to colour the ground and used the white of the paper, although in retrospect, this was good for comparing and avoided my making assumptions. The drawing still left a lot to be desired, specifically with the bottle – this was quite an unusual shape which thwarted me a little.  The second study was painted onto a coloured ground of Paynes Grey.  This assisted with the shadow areas and again, as noted in the coloured ground exercises, made it easier to create the lightest lights.  The drawing had improved from the previous study and the use of the red apple made a much more balanced image colour wise, plus as the bottle was a strong object it contrasted with its complimentary colour of green nicely.

Still life – Assignment 1
Oil on canvas board A3
Session 1

Here is my set up and progress after my first session.  This was a particularly dark, overcast and miserable day, which worked well for isolating the light box, but made it difficult to judge tones on the canvas. I also found a much redder specimen of apple in the fruit bowl, so replaced the earlier one.  I then decided to use oil paints rather than acrylic, so that I could keep working into the paint over a few sessions. Another change, was to stand rather than sit, this encouraged me to move back and view my progress regularly and gave a slightly “looking down” view-point. I kept my colour study in view at all times for comparisons – in retrospect, it would have been a good idea to refer to the tonal study too! 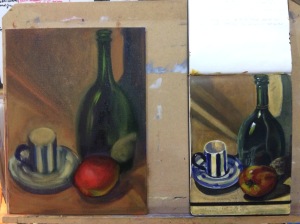 Still life – Assignment 1
Oil on canvas board A3
Session 2

Returning after lunch, I worked on the tones all over the painting and tried to give each part the same attention.  The many ellipses were a challenge and the stripes on the saucer were a nightmare – what on earth was I thinking?? To be honest, I loved working at it and I think it ended up more right than wrong – even with the shadows thrown into the mix.

Still life – Assignment 1
Oil on canvas board A3
Session 3

Next morning – fresh eyes, adjusted the bottle shape and worked more on the cup and saucer drawing.  Added the lightest highlights, plus some lower highlights. Adjusted the tones in the background. Finished? Decided to leave a while and review. 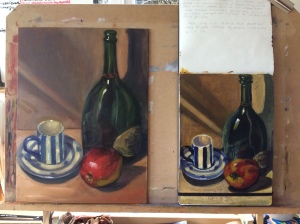 Still life – Assignment 2
Oil on canvas board A3
Session 4

Hadn’t intended to do any more today, yet had to go back to the studio for something else and stood back and had another look.  The adjustment to the bottle I’d done that morning (the right hand side) was completely wrong! I had widened it far too much, so, the beauty of oils, I smudged it right back to where it had been and merged the shadow – much better.  Happier, I left it till the next day.

Here we are today 11/03, final review.  Still happy with the drawing and have noticed a couple more highlights on the torn foil around the neck of the bottle – added these, stood back and am satisfied to call it finished. 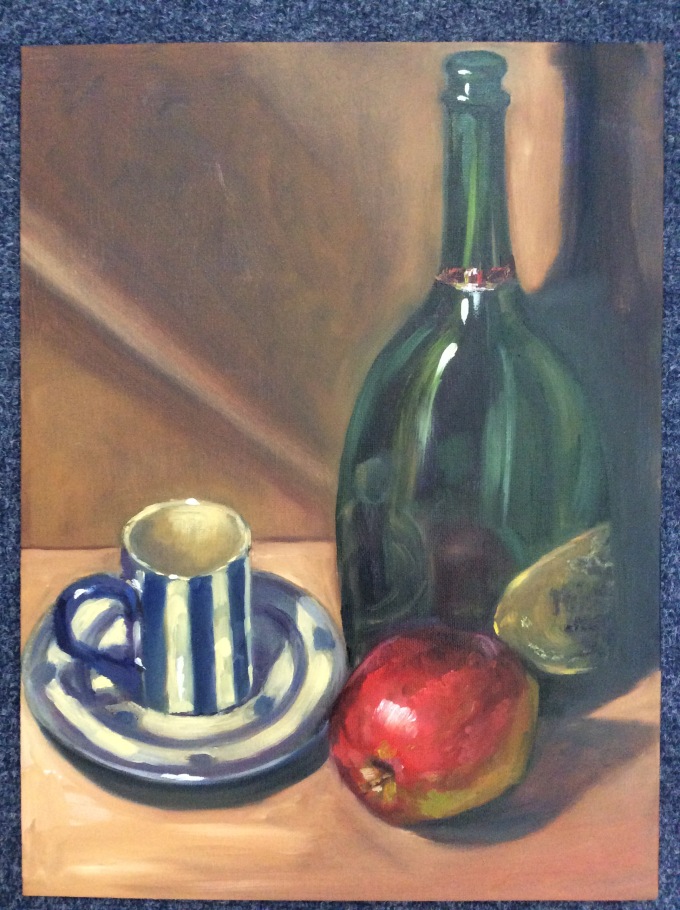 Still life – Assignment 1
Oil on canvas board A4
Final work

2 thoughts on “Practice of Painting – Assignment 1”