Our tutor’s clues for this week were female, one week, think burlesque! From that I decided, A3 canvas board, a deep red ground and oil paint.

Introducing Sassparella also known as Claire to her friends, one half of a local burlesque duo. Fabulous costume of black basque (with black and white feathers), a feathery bustle, boa and fans, inexplicably high black patent heels, stockings and suspenders from their chicken routine – Funky Chicken played by their partner band. Sassparella was fun and extrovert, as you would have thought, and we had a lot of giggles even though our two male students were a little pink faced. Anyway, back to work…

I began with an A3 charcoal sketch, which although was thoroughly unsuccessful in itself, allowed me to make all the proportional mistakes prior to painting,  I’d left no room for the feet (and those shoes had to be included), the top half of the figure much too broad and the body too short.  However, I noted these shortcomings on the sketch to remind me. 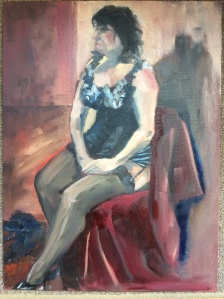 Sassparella aka Claire
Oil on Canvas Board A3

Working in dilute raw umber with a large hog brush, I blocked in the shapes of the figure and chair, lifting out highlights with a rag in order to describe solidity and volume.  It was noticeable to me how my initial sketch was just as valuable for its inaccuracies as it would have been if proportionally correct. NB: I was cutting it fine time-wise when I arrived and had to grab the last space, so no choice of view. I was, however, very pleased with the pose from my position.  At tea-break, we all have a look round at everyone else’s work and it was lovely to see that, wherever you were, the pose was interesting and inspiring. By this time, I had blocked in the figure, chair and rendered most of the background, although was having trouble with the similarity of tone in the profile of the face and the background. Mentioning this to my tutor, he suggested blurring out the face and re-working the subtleties of tone in the background.  I wasn’t sure if I’d succeeded but at the critique, he did think so.

My thoughts were, I was very pleased with the composition, however, in hind sight I wished I had worked larger to be more expressive, especially with those feathers! I overworked the face as it was much more like Claire about 5 brush strokes ago. Plus, I had allowed the colours to become muddy whereas, at half time, they were quite fresh. On pointing this out, Mike (our tutor) agreed and suggested I scrape off the paint where I wanted to rework to avoid this.  In a two session sitting, this is less of an issue, as the paint is fairly dry after the week’s break to add more.

An excellent model, who didn’t move (although she did say that the corset wouldn’t let her anyway), a fun morning, and not too bad a result.  All students had a successful session and thoroughly enjoyed it.