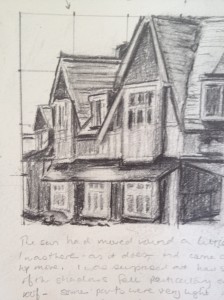 They made me adapt my composition by putting the focal point in its setting and making it more of a picture rather than just a sketch of building architecture.

Project: Townscapes
Exercise: A Sketchbook of Townscape Drawings
Alms Houses, Fordingbridge, Hampshire
Final sketch before the limited palette study, all the elements worked through are included here to include in the final piece.

for the atmosphere, I was trying to avoid an architectural style of drawing (albeit not as accurate), which is difficult when concentrating on the more mathematical aspects such as perspective and scale.  This is where the tonal sketch was particularly useful as detail was secondary to the tones and shadows.  I think this worked to a degree but in future, to obtain more atmosphere and a less clinical feel, I would introduce more tone and less detail, even in the foreground.  I also tried to make lines a little more uneven as the buildings are fairly old (early 20th Century) and have gained character and some crookedness. Adding trees and figures in the distance helped plus a shadowy figure exiting the foreground (a la Degas?) gives it more of a narrative.  However, on the whole I think that this is its biggest weakness.

A Note Regarding the Previous Project: Perspective

As noted in my previous post Check and Log – Perspective, one of my key stumbling points in successfully understanding this, was “How do I decide whether a line/angle runs up or down?”.  During the exercise: Study of a Townscape Using Line, I thoroughly worked through my difficulties. Sitting in the High Street of Fordingbridge, I attempted sketching the view down the street.

I struggled on for an hour or so and took some photos so I had more reference when I got home.  I returned to the same spot the next day and around the same time. Worked on the original sketch again and made some zoomed in detail sketches and notes. I came home and prepared my A3 cartridge paper, squaring up in readiness to enlarge my sketches – with some trepidation as I still didn’t really understand why I wasn’t getting it. Next day, determined to crack this, I set about enlarging my drawing – tackling the row of shops, I drew in a faint line for my eye level and … by jove I think I’ve got it! Lines below the eye level run up to the vanishing point, lines above run down! Why on earth I couldn’t get this I don’t know – so simple and let’s be honest very logical! Anyway, that’s the happy ending – so now to practice, practice, practice!

Note: I would have loved to post the A3 study to illustrate the breakthrough, however, frustratingly it was lost in the “post” with my other work and even more annoyingly, I omitted to photograph that one piece before it was despatched.

However, once the drawing was sketched out, I re-enforced the lines of foreground objects with a thicker Sharpie marker and gradually used thinner nibbed drawing pens through the image to the background. This enhanced the aerial perspective as well.